skip to main | skip to sidebar

Video of Anastasia and Paul's Adoption

They are home now. Our journey to make them a part of our family is done...

Smiles and Trials. Come join us over there and continue reading about Anastasia and Paul along with the rest of our family.

But first, please enjoy this video of our journey in Ukraine.
Posted by junglemama at 3:20 PM 35 comments:

Many people wonder what to expect with a newly adopted child. Well I think it would be unfair to assume that all children will act the same way but I think it is fair to say that you can expect some or all of the following:

Lots of oohs and aahs over things that you take for granted.

Toilet paper in the waste basket, poor hygiene skills, and not flushing.

No sense of ownership, no concept of what is other people's belongings. Lots of touching things they shouldn't.

Poor table manners. Eating with fingers, licking the serving utensils, wiping hands and face on arms and clothing, pushing dishes to the center of the table when done, talking with mouth full-- however don't all of our kids do this at some time or another.

Use of bad language either because they have not been taught or think you cannot understand them. Often they are frustrated and will use bad language as a way to vent.

Lack of eye contact. Hesitant to trust that you can meet their needs. Confused that they are expected to follow directions from "new parents" who don't even speak their language.

Picky eating or overeating. Possible hiding food in pockets or in room.

Inappropriate interactions with siblings at first. Either too rough or too touchy feeley because they don't understand yet that these other kids in the house are actually their siblings now-- not just potential friends to have crushes on or decide to not like.

Not wanting to wear a seatbelt because it is uncomfortable and tight.

Scared of pets because they haven't been around them before.

I am sure I forgot a few things so feel free to chime in, but for the most I think it is safe to say that if you expect these things and prepare ahead of time how you are going to handle them should they come up, you will get through them. As for us, we have had our fair share of these issues-- but not all of them.

We are being consistently firm since a few of these things are habits that won't die-- but overall we are incredibly blessed with our two newest children. They are troopers, they are quick to forgive and forget, and they are eager to do everything their siblings do.
Posted by junglemama at 9:32 AM 10 comments: 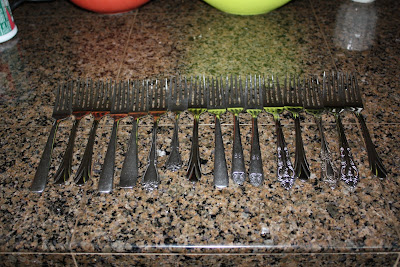 These are our forks. Over the course of our marriage-- seventeen wonderful years-- we have acquired many different sets. To some it may seem a bit odd having so many mismatched silverware, but to me-- it suits me just fine. No embarrassment when company is over... no feeling to go out and replace my silverware with one new complete set.... I am quite happy with my forks. Now granted, I am not too happy when I get one of the forks with a bent prong-- but we deal with that too and just bend it back in shape.

As I was setting up the kitchen island for a dinner buffet one evening and carefully counted out sixteen forks, I noticed how much our forks resemble our family. Some are long, some are short, each have a unique and beautiful design different than the other, some have a stubborn, bent prong-- but all are needed because if we were a fork short one of our family members would not eat. Well not literally because of course we would get another one, but you get the picture. Without one of our children, we would be missing something too.

I even remember (for the most part) when and how we got each fork. Some came in our wedding set. Some came from my Grandmother when she passed away. Some came from a friend passing along their extras. Some came as a birthday present. And a few have just showed up at our house and we have decided to have them stay.

For some reason, they make me think about how our family is a mix of all different people brought together to make up a family.

I look at our forks and they make me smile.
Posted by junglemama at 6:26 PM 23 comments:

A Way to a Child's Heart Is Through Their Stomach

Food is a big deal around here. Especially dinner. Anastasia and Paul are right by my side when I begin dinner preparations. They especially get excited when they see whatever meat I have gotten out to cook. Last night I got out about five pounds of ground beef to split in half-- spaghetti that night and tacos for tomorrow. Anastasia quickly grabbed a piece of the raw ground beef thinking it was ready to eat and was about to put it in her mouth until I stopped her. When I told her "after hot" as I put the meat in a frying pan and began to cook it on the stove, she understood. She helped me break up the "macaroni" and add it to the boiling water. Her and Paul were thrilled when they saw me cutting ears of corn in half. If I had any concerns about their appetites before-- I don't anymore. Both of them enjoy eating as much as we do.

The sweetest thing happened when I mixed up the spaghetti in a huge bowl and began to carry it over to the table. Anastasia ran over to me and gave me a big hug and said, "Spaciba!" If you ask me, I think that is when she realized that we can meet her and Paul's needs.
****************
Tonight we all enjoyed an after evening swim snack of popcorn and Pepsi. Anastasia and Paul love both! And it is so wonderful to see how all the kids are getting along. 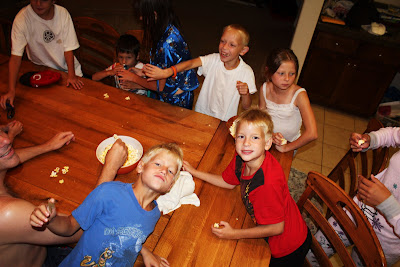 John and I are especially touched by Anastasia's desire to help her younger brothers. 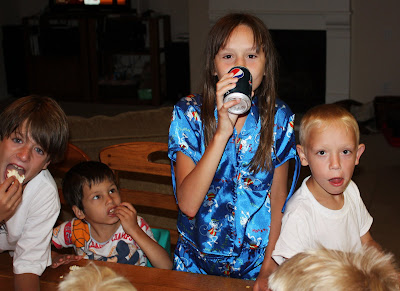 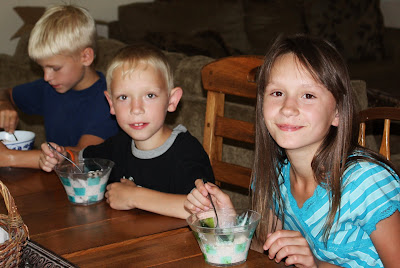 It is so nice to have two children that are not picky eaters. They have already tried shrimp cocktail, Chinese Chicken Salad, coleslaw, mashed potatoes and gravy, milk, yogurt, Otter Pops, cream cheese, salsa, burritos, pizza, roasted chicken, rice pilaf, and deli sandwiches. They love it all!
Posted by junglemama at 8:46 PM 18 comments: 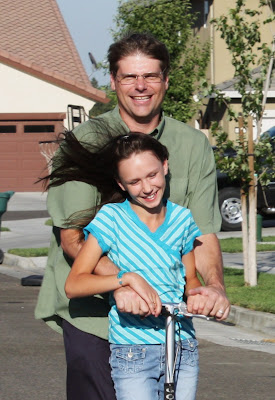 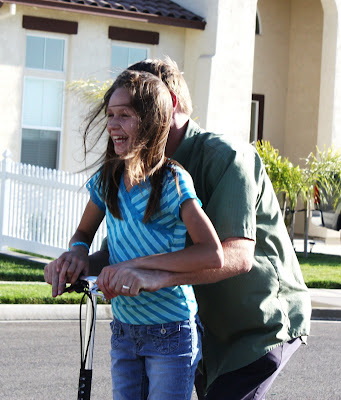 And looking at these pictures make me smile right back. When I showed her them, she agreed that she looked very pretty. Pretty indeed.
Posted by junglemama at 9:28 PM 22 comments:

The Ice Is Broken

Anastasia and Paul are beginning to interact with our family more. The first two days they had headphones glued to their ears listening to Tic-Toc over and over because it is familiar to them. I finally had to limit the time they got to use them and instead Julia offered them a wagon ride or a few kids initiated a game of two square. I think it is okay to officially say, "The ice is broken."

Anastasia and Paul introduced "Sabatchka in the middle" to the other kids. I think they felt good being able to teach their siblings something.

No car sickness on the drive to the Orthodontist-- probably has everything to do with me not having to swerve to avoid major potholes. It was smooth sailing.

Anastasia remembered her boundaries all day and even graced us with her smile a couple of times. It sure is beautiful.

An amazing thing happened yesterday-- but I will wait to post a picture to tell you! I have so much to share about meal preparations, helping out around the house, Paul's new shoes, and Anastasia helping Alex and Dennis. Stay tuned.
Posted by junglemama at 7:45 AM 12 comments:

Last night I ended up having to have Anastasia go to bed (it was 8pm) for the night after I caught her in my room playing around with my nail polish with evidence that she had gone through other stuff. I had explained numerous times throughout the day that all she had to do was ask to go into other people's rooms and touch their stuff. I even went as far as to roll play how her sisters have to ask to wear her shorts or use her headband (not that they would). After she had a chance to put on her pajamas I went back in there to kiss her goodnight and she immediately popped up with her happy self ready to apologize. I told her thank-you but I reminded her of the many incidences she had had that day and told her tomorrow she can begin again.

At least she didn't pout or throw a fit-- she said okay--- as if relieved that I didn't have the look of wrath on my face. Makes me wonder what kind of discipline if any they had in the Internat.

This morning she was up early going through her clothes. Rachel said she had been going through them for nearly an hour. I didn't stop her. I think it is good for her to take inventory of her things. I didn't even have her change her red shirt, lime green and hot pink flower capris, and bright purple headband. She will learn to match soon enough.

First thing after getting dressed and fixing her bed (I only had to remind her two days) she asked me for confecta (candy). I looked at her strangely and told her that she had to eat breakfast first. She smiled, I smiled and then she proceeded to eat half a packet of banana oatmeal, one half of a waffle, and a bowl of Ukrainian Corn Flakes that I brought home. I thought it would be nice for her to see something familiar-- not the box of cereal because of course they wouldn't have such a luxury in the Internat but the writing on the box. She read it and smiled.

Afterwards, I asked her to help unload the dishwasher. As soon as she was done she must have run off to tell her brother because Paul was by my side next asking incessantly to help. My big boy helped me load the whole dishwasher!

Today things seem easier-- but we haven't left for Caleb's Orthodontist appointment yet. I am not sure how they will do with the hour long car ride and two hour wait while Caleb has his mold taken for his retainer.

Oh and I forgot to mention, Paul pet our kitten Bello yesterday and had his first swim lesson! Still won't go near the dogs.
Posted by junglemama at 8:45 AM 17 comments: